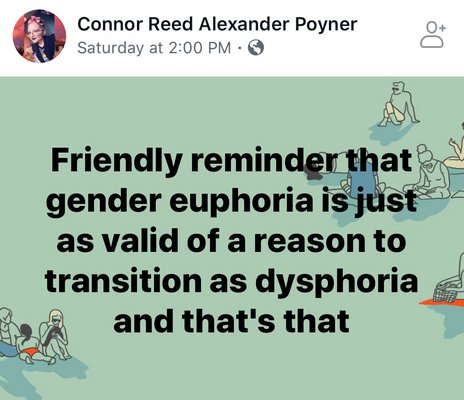 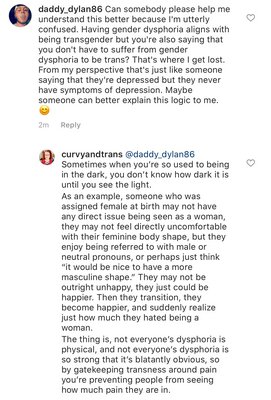 It’s ok to just want something else that makes you happier. (Image via Facebook)

After I posted this to Instagram I got a transmed troll in my comments asking that someone please “explain” this to him. I know he’s a troll because he’s shown up on other people’s accounts trying to force emotional labor on this subject as well. His goal is to try to wear out people who advocate on behalf of non-binary individuals. Unfortunately for him, I was ready for this:

Sometimes when you’re so used to being in the dark, you don’t know how dark it is until you see the light.

As an example, someone who was assigned female at birth may not have any direct issue being seen as a woman, they may not feel directly uncomfortable with their feminine body shape, but they enjoy being referred to with male or neutral pronouns, or perhaps just think “it would be nice to have a more masculine shape.” They may not be outright unhappy, they just could be happier. Then they transition, they become happier, and suddenly realize just how much they hated being a woman.

Not all dysphoria is physical, in fact only one of the diagnostic criteria for Gender Dysphoria is centered on the physical body, all of the other 5 are about social factors.