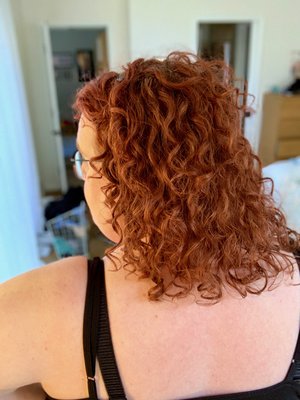 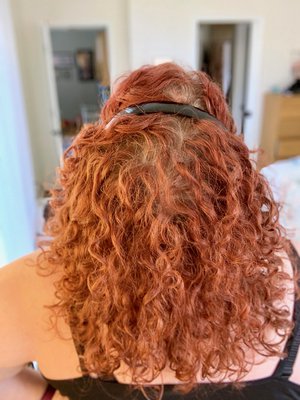 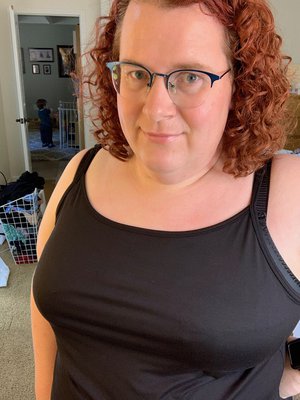 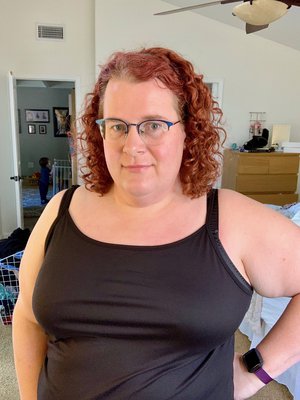 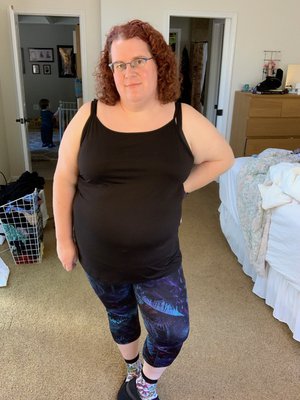 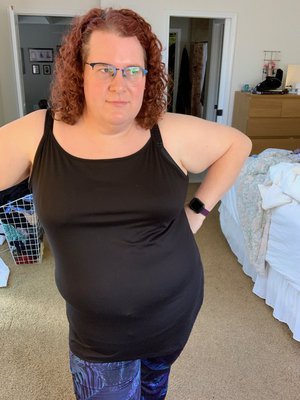 Why is my hair always the most amazing on days I don’t care? Anyway, I’m trying to chase away the dysphoria blues, so here’s some unaltered no-makeup photos, guest starring my toddler in the background. It’s been two weeks since my laser session so most of my facial hair has fallen out now, and that helps a lot.

I’ve been thinking lately about how body positivity and trans positivity sometimes have conflicting messaging. Body Positivity centers the idea that there is nothing wrong with your body, you don’t have to change it to find happiness, all bodies are good bodies. It positions itself that the reason people, especially women, feel so negative about their bodies is because we’re so entrenched in systemic fatphobia and sexist messaging regarding women’s self worth. The ever present message is “you can learn to love your body as it is.”

But then there’s the trans perspective, where so many of our feelings surrounding our physical form come from our bodies actually being wrong. We aren’t miserable because society tells us we’re ugly, we’re miserable because our own brains know that what we see is wrong. The call is coming from inside the house, as it were. The message of transition is “you can change your body if you want to.”

Two messages, both positive, saying completely opposite things. On the surface it feels like a contradiction, but is it?Trans women also internalize these beauty standards as we grow up, long before we even know we’re women. We subconsciously align our own mental image against these messages, and that plays a role in how we view our pre-transition bodies. Any trans egg that has said “I’d be far too ugly of a woman to be worth transitioning” is applying these internalized messages to themselves. So, there is a place for body positivity within transness, but it’s not a perfect mesh. Hearing the message that you should find a way to love this thing that is so clearly wrong can be painful.

I don’t know how to resolve that, but this brings me to another issue that I’ve encountered both with body positivity, and also bopo conscious nutrition advice. So many of these messages are ablest, founded in the privilege of neurotypicality, and don’t account for people with mood disorders or ADHD. This has been my chief frustration with the Intuitive Eating movement, because listening to your body doesn’t work when your brain is saying you should eat ALL. THE. TIME.

My ADHD keeps me from being able to diet entirely because I cannot control my snacking habits. If it doesn’t work when on a non-diet, it’s definitely not going to work when not on any form of eating management. I’m also unable to exercise because the mere idea of it is monumental task to approach, which of course means it never actually happens. We bought a stationary bike entirely to make this easier, and I still aren’t exercising regularly because my brain says “naw, that sounds like work, let’s relax instead.”

Today I’m feeling pretty crummy about my ability to lose weight, something I need to do for my transition, but just can’t seem to stick to. I thought I had a working solution when I increased my progesterone dose and started shedding weight, but then I plateaued again. I don’t even hate my weight that much (tho it would be nice to get down to a size 16), but I have to be 80lbs lighter to pursue surgery, and not being able to get there makes it feel impossibly distant. I know I’ll get there some day, I’ve got ten years to do it, but still… sigh