It's Activation, not Appropriation

@DameKraft did a fantastic thread today about how a lot of trans people may be concluding that they are cisgender because their incongruence is not strong enough to feel like they have a right to identify as transgender. Firstly: YES YOU ARE TRANS ENOUGH.

the only stable definition of being trans is "not identifying with your assigned gender a birth" and I think that definition includes a hell of a lot of people who currently call themselves cis and are worried about appropriating being trans.

no one consented to their assigned gender at birth, and certainly not everyone grows into that assignment and accepts it.

people want to draw borders and boundaries around the risks they face for how they appear, but that's attempting to build communities based on trauma bonding and is not sustainable.

Secondly, there is no such thing as “appropriating” being trans. If you do not feel a strong connection to your assigned gender, you can call yourself trans! You aren’t offending anyone (at least, anyone whose opinion matters).

I know how easy it is to fall into this trap, because before my own wakeup call I also was afraid to ever mention my feelings around my gender. I thought it would be insensitive or appropriative of “actual” trans people. It’s laughable when I think of that now.

@DameKraft @memecannot I don't consider myself cis, but I'm still reluctant to call myself trans because I'm afraid of appropriating it.

@P2N2222A @DameKraft @memecannot "Culture appropriation" only relates to culture. You can't culturally appropriate being trans, because transness is not a culture

@AnonymousAmbi @P2N2222A @memecannot yeah, maybe "erasing" would have been a better way to put it.

@DameKraft I find I worry most about this as a nonbinary person. Nonbinary by definition is a trans identity, but it doesn't feel that way because I passed as cisgender (and can still do so, as physical transition isn't a thing I consider strictly necessary for me rn) for so long.

@darksirensally "passing" to me is based on the patriarchy requiring gender to be guessed at a distance and I don't consent to that, which is difficult for me to live with so I just give the world what I call "my apparition" that "passes" as a woman but I certainly don't ID with it.

Ada Powers did a fantastic thread a few years back about how mixed pronouns work, which partly forked off into a conversation on gender expression across the cis/trans divide. I’ve extracted the relevant pieces below, but the entire thread is worth exploring.

First, a bit about the binary. Big news I know, but... most people don't neatly fit inside of it. Society wants us to think about gender like a slope—with most people being cis, and a few of us being trans—but why shouldn't it be a bell curve, like basically everything else? 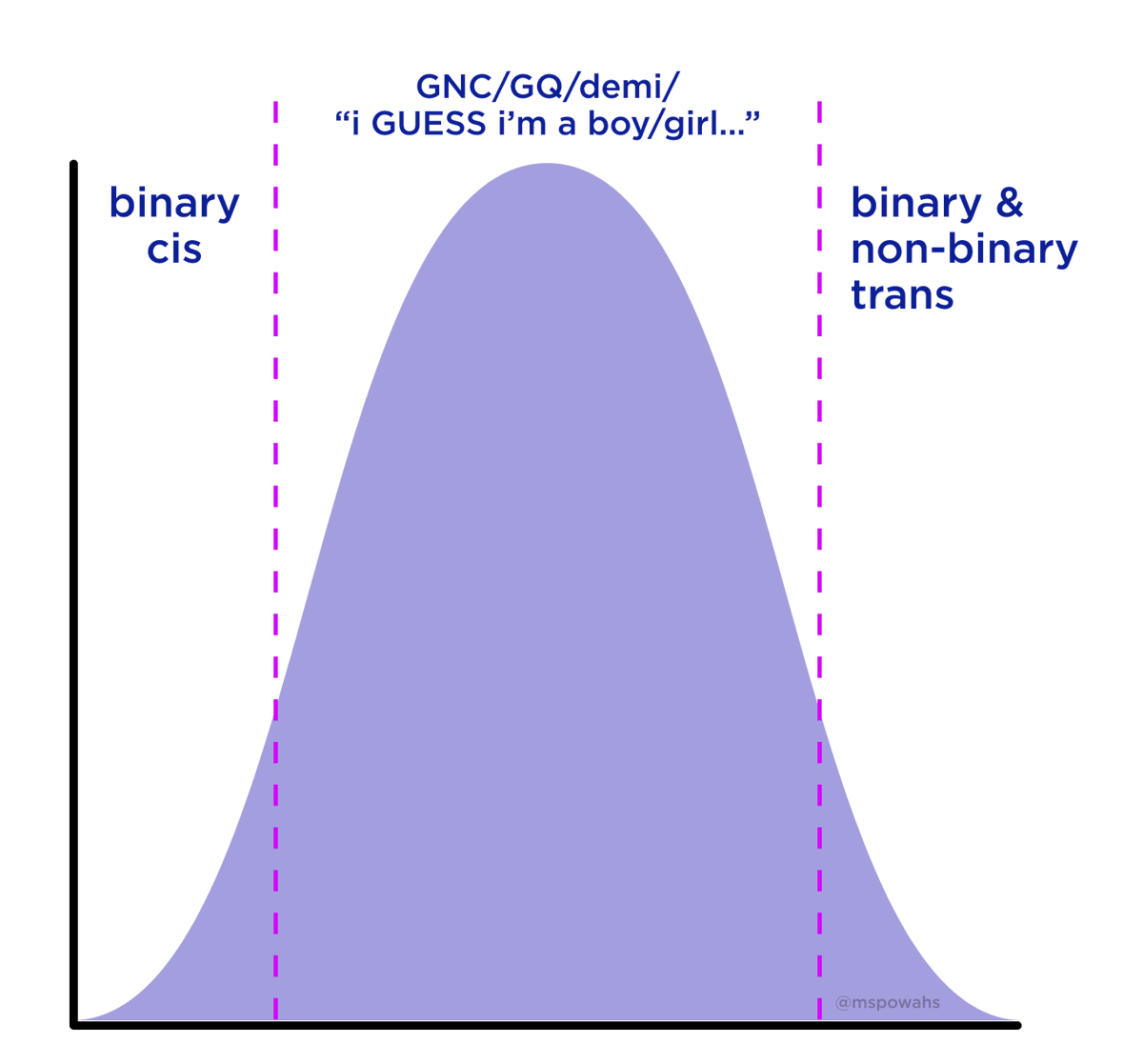 Further, why can't we queer up the dual-control model by applying it to gender? That is, what if our gender identities aren't only driven by an aversion to our assigned gender, but rather, a delicate balance of aversion and affinity?

All this is to say: gender is MESSY. It's ANALOG. And like everything else in the natural world, the categories we invent to contain it can only do so much.

Fortunately, we have greater access to identity language than ever before. Which brings us back to pronouns.

@GloriaSlap @TriumphantBass My thesis was (and is) that most people only identify solely with their binary gender out of a cis-normative default (or what Natalie Reed calls the null hypothe-cis). And opening space to consider gender as additive, and promoting language that makes room for that nuance... 1/

@GloriaSlap @TriumphantBass 2/ ...can allow people to consider their own gender variance, without precluding it on the basis of not authentically wanting to reject their assigned genders entirely—and, given the response to this thread, I'd say demonstrates a groundswell of desire for that.

@GloriaSlap @TriumphantBass ...of this is through the lens of pronouns, which can be an accessible and wholly valid way of starting a gender journey without overcoming the massive inertia involved in other commonly recognized forms of transition.