The Lies That Bra Companies Tell 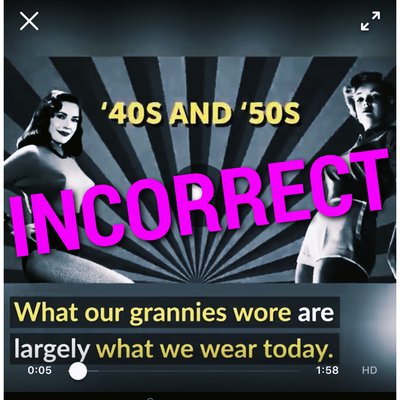 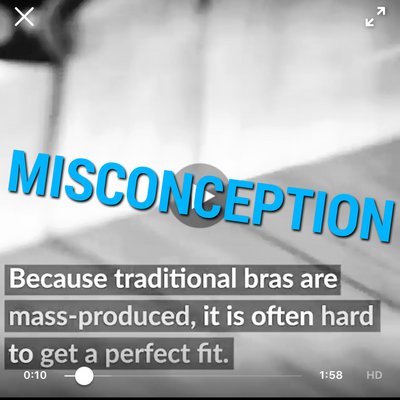 An ad showed up on my facebook feed for one of those adhesive bras that really only work if you’re small band / small cup, and the first 10 seconds of the video were so full of lies that I became enraged. So of course I had to write a rant. 😆

Falsehood #2: “What our grannies wore are largely what we wear today.”

This is a straight up falsehood, bra design has changed a LOT since the 1910s when Mary Phelps Jacob patented the first bra in the US. Bras became the standard during the late 1910s and early 20s due to corset steel being needed for the war effort. Early bras were basically just bralettes, bikini tops, or bodices. They were all soft cup, usually without elastic and often made from heavy materials (parachutes and soldier uniforms taking up all the other options) These bras lacked much of any support and were mainly used to protect the breasts from irritation. The underwire wasn’t invented until the 1930s, and didn’t gain popularity until the 1950s.

The image used here for the 1940s even shows how much bra designs have changed!! In the 1940s and 50s saw a trend of bras meant to lift and separate the breast, such as the pictured Bullet Bra which formed a conical shape popularized by WWII propaganda and advertising, and the Cantilever bra (invented by Howard Hues for actress Jane Russell in the film The Outlaw) that serves as the basis for most modern bra designs.

The post-war baby boom saw a sudden need for underwear for nursing mothers, giving rise to the first maternity bras. When those baby girls reached pubescence, the baby boom gave birth to training bras and camisoles in the 1960s. In 1961 the WonderBra company introduced the plunge push-up bra (tho it didn’t gain traction until the 90s when it was introduced to the UK and US).

The Sports Bra was invented in 1977, introducing the idea of underwear as outerwear, which then then led into the rise of fashionable bras designed to be seen. This carried into the 90s when companies like Victoria Secret put a huge push into marketing lingerie as fashion. Teddys and Babydolls became popular alternatives to bras, especially as night wear, and introduced the idea of sleep bras.

Changes in western diets during the 80 and 90s (as well as the introduction of breast augmentation), caused an increase in the need for bras that were more supportive at larger cup sizes. This caused bra design to take on more engineering challenges, with every stitch and strip of fabric strategically placed in order to provide the most support. Many of the designs we see from Elomi, Curvy Kate and the like were all created in the last 20 years. The 2000s also saw the introduction of the molded one-piece cup design that is now so prevalent in plunge, contour and t-shirt bras.

This gives the impression that bras are machine made, which is completely false. All bras, as well as most other garments, are still made by hand. This is why good bras cost so much, there is a LOT of stitching that goes into a bra’s construction. Yes, all major bra companies do have their products mass produced, usually by factories over-seas, but every one of the bras that you receive was hand assembled by a human at a sewing machine.

This is also why smaller companies may only focus on a narrow range of band and cup sizes. The more sizes you offer, the harder it is to introduce a new product.

Falsehood #4: “It is often hard to get a perfect fit.”

The reason it’s so hard to get a perfect fit is two fold: Firstly, most bra companies target for the most common shape, round or teardrop breasts with strong forward projection. Unfortunately, most common in this case just means largest slice of the pie, leaving a huge number of women having to wear bras that aren’t perfect for their shape.

The second reason is that few women actually know their correct size. Clerks in most department stores or chain stores are improperly trained on how to do a fitting, and most bra size calculators are (again) based on the most common breast shape. Even the A Bra That Fits calculator, which is one of the best methods available, is still expecting that the majority of difference between bust and underbust will be in forward projection. This causes it to over-estimate cup size for women with shallow breasts or side & back fat.

Additionally, many stores only carry up to a DDD/F cup, G cup at the most, so many women who think they are an F or G would actually be better in an H, I or J cup size and don’t know it because that’s just what the store they got fitted at carried. Last year my wife was complaining about the fit of one of her favorite bras, because it didn’t actually set Victoria’s Secret is especially notorious for awful fitting, as their sizing techniques are atrocious. A bra specialty store, especially one that is not a chain, will be most well equipped to give you an accurate fitting.

For more awesome knowledge about bras and lingerie in general, I highly recommend following The Lingerie Addict herself, Cora Harrington, on Twitter and Instagram. She has tons and tons of valuable insight into bra design and manufacture.