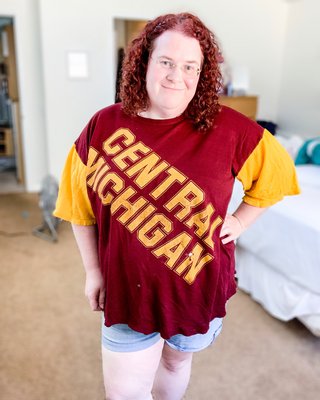 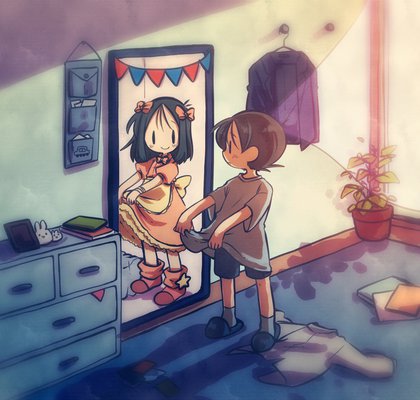 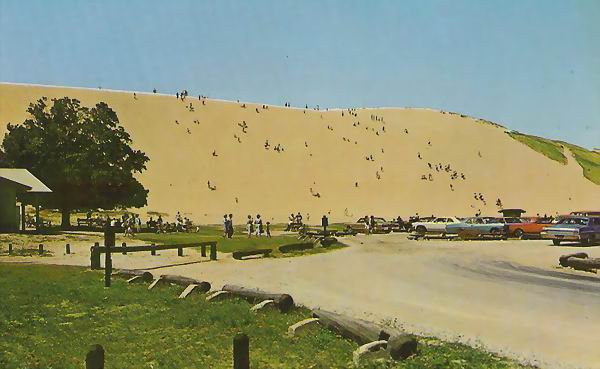 I have had this shirt for nearly 27 years. It’s a college pride shirt from Central Michigan University that I got from my mom when I was 12 years old. I think it’s a 4x (I cut the tag off decades ago, but that’s the way it fits), and I think I wore a large or XL for most of my teen years, so the shirt was just obscenely big on me. I wore this shirt whenever I could. I wore it to bed, I wore it to school. Basically as long as the shirt didn’t stink, I would wear it, because it made me happy.

One time I wore it over the weekend at my dad’s house, which usually meant just lounging around watching TV. He had to go to the hardware store for something, and he took me with him, so I just ran out and jumped into the truck, not thinking about what I was wearing. In the middle of the store I felt a cool draft under the shirt and suddenly realized I had forgotten to put on pants and had been walking around in just a shirt and underwear. Nobody noticed, because the shirt was so big on me. I didn’t even think to put pants on under it that day, because it was just natural to not need them.

I would wear it while riding my bike through the streets of Mt. Pleasant, the sides of the shirt flapping behind me as the wind whipped through my hair. I wore it one fall when me and a bunch of other kids went on a camping trip to Sleeping Bear Sand Dunes. We climbed the first dune (The Bear) huffing and puffing our way up the sandy face, so steep that after the half way point you cannot even see the bottom, only to continue to walk along the dune trails until we reached the top. There, with Lake Michigan in front of me and Glen Lake behind me, I stretched my arms out and let the breeze blow the shirt behind me like a cloak, and I felt free.

You see, it wasn’t just a shirt, in my mind it was my dress. It was the only dress I had, because no one else knew that it was a dress, and that was the only way I was allowed to have one.

I thought of this shirt when I saw the second image on this post circulating through trans twitter and facebook groups. The little boy in a big shirt, imagining the dress they can’t have.

At the age of 16, when I decided to repress all of my gender feelings, I retired the shirt to my mementos box in storage. I told myself it was because it was starting to show wear and tear, and I knew that if I kept wearing it then it would fall apart, but now I can look back and recognize that the real reason I put it away was because I couldn’t bear to wear it any longer. The shirt represented my girlhood, and it needed to be locked away with the rest of those feelings.

The shirt is still as soft today as it was back then, and it gives me immense joy to finally wear it as the grown woman I so badly wanted to be back in 1994. Sadly, the shirt would not last long being worn out and about. It is thread bear and frayed, with sticking coming apart at some seams, and small holes throughout from all the times it snagged on something and got a tiny tear that just kept getting larger and larger. It stinks like the inside of a Sterilite box that has gone through far too many hot summers. It will be going back into that box again today, because I can’t bear to lose it. It is the avatar for all my hopes and dreams, come to fruition.

Cartoon drawing originally posted by Twitter user @774_10.
Photo of Sleeping Bear Dune Climb is from 1973, but the source was not attributed by the page I found it on. The dune largely looks the same today as it did then, tho a little bit shorter from time, wind, and the steps of millions of climbers.