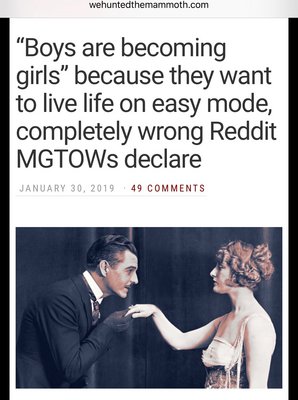 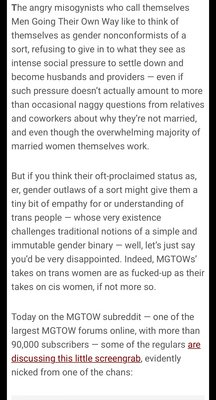 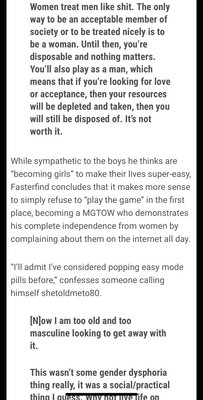 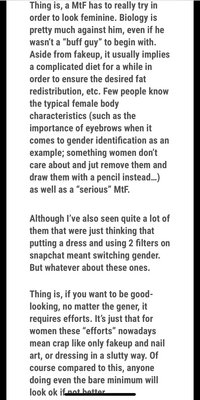 This is what happens when trans eggs (people who haven’t figured out they’re trans) get sucked into incel culture. They turn into the worst kind of MRA. These comments on these posts, they’re absolutely people experiencing gender dysphoria and converting it into anger. I should know, I’ve been there.

Flashback, I’m 18 years old or so, I’ve completely given up hope on ever becoming a woman and have blocked out everything about ever thinking of myself as a girl (memories that I’m still gradually unlocking and recontextualizing to this day). At this point my desire has turned into jealousy and been twisted into arousal. I’m also still pretty deeply stuck inside the church, so this is before I’ve really come to learn anything about feminism, misogyny and all the ways patriarchy represses us.

I remember thinking “Women have it so easy.” I remember having this mindset that women get everything handed to them and that women hold all the keys because men have to do all the hard things in courtship. I remember being angry that women were able to be so pretty and so glamorous “so effortlessly” (lawl, I was a dumbass).

It would have been so easy for me to have turned to these mentalities if I had been exposed to this kind of toxicity. So so incredibly easy. All my gender feelings would have been warped straight into loathing and rage… and that would absolutely have been formed into misogyny.

Just like my father did. I’m quite positive that my dad suffers from gender dysphoria, but where I found feminism, accepted trans women as women, and then myself as a woman, he found misogyny and sexism. Probably because he grew up as a farmer in Hicksville Michigan.

This trend in young men being cultured into hatred is the absolute worst thing to have come out of the internet. It started with 4chan, and now reddit has taken up the torch. It’s going to get worse before it ever gets better.

And lets get something completely clear: “Men Going Their Own Way” is exactly the same as Men Right’s Activists. The venn diagram between those two groups is a circle.